The aim of Suzhou Documents is to both access China’s artistic legacy and to comprehend its environmental and technological challenges through the prism of the ancient city of Suzhou. Located in the Jiangsu province some 80 kilometers from Shanghai, Suzhou belongs to China’s most densely populated area.

The summer of 2016 does saw the inauguration of Suzhou Documents, a large-scale exhibition of contemporary art held at several venues within the city of Suzhou, including the Suzhou Art Museum and Suzhou Industrial Park.

As a starting point for the Silk Road that once connected China with Persia, India and Europe, Suzhou flourished as the undisputed cultural capital of Ming Dynasty-China (1400-1700). Connected with the Yangtze River, Suzhou saw off the fleet of Zheng He, a Chinese Muslim admiral whose early-15th century maritime expeditions brought Imperial China in contact with India and coastal East Africa (present-day Yemen and Sudan).

Suzhou Documents address Suzhou as a centuries-old but also futurist global hub, exploring through artistic and other speculative means a largely unwritten history of transcultural encounters between East and West in all their vagaries, conflicting timelines and unforeseeable beauties.

After the first edition in the summer of 2016, Suzhou Documents will be developed into a series of exhibitions (or an institution in its own right).

by Shwetal A. Patel The co-curators of the inaugural exhibition ‘Histories of a Global Hub,’ Zhang Qing (Founding Director of the Shanghai Biennial and Curatorial Head of the National Palace Museum in Beijing) and Roger M. Buergel (Artistic Director of documenta 12 (2007) and Director of the Johann Jacobs Museum in Zurich), set out to eschew what they saw as the ‘largely exhausted’ biennale format. Describing the latter as a ‘bouquet of arbitrary themes’ with an emphasis on spectacle, they argue for the value of depth and sensitivity in bringing together the ancient and modern in a sustainable, yet rigorous manner. 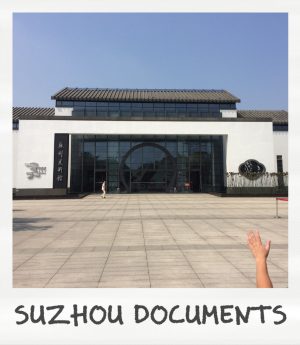