The inaugural exhibition in 2008 set the scene for future Biennials in 2010 and 2012, with a commitment to place, site and multiple histories encapsulated in the themes of each Biennial year.

Tatton Park Biennial was inaugurated in 2008, with over thirty artists and writers creating new works responding to the site’s botanical collections. In 2010, a new group of over twenty artists increased the ambitions of the Biennial, considering notions of identity and place in shifting political, social, economic and environmental landscapes.

Danielle Arnaud & Jordan Kaplan are the Biennial curators for 2008-2012, bringing together a trilogy of events committed to the production of new, site-specific works that address time in a non-linear manner – future, past, present – to breathe new life into old debates and old ideas into new contexts.

The Biennial in the first three editions begins with the site itself, with each edition producing works that, necessarily, move from the local to a more universal understanding of context and site-specificity. The 2008 Biennial focussed on the collections held at Tatton Park; the 2010 Biennial examined ideas about identity, its inherent politics and placement on a fluctuating planet.

2012 explores flight in its most dynamic and cerebral sense – what we dream of, what we are capable of and the flourishing of the imagination in a shrinking world view. 2014 and 2016 will see editions examining ideas about myth and memory, all reflected in the sometimes make believe of Tatton itself.

The Biennial is hosted by Tatton Park, which is owned by the National Trust and managed by Cheshire East Council.

In 2012, artists participating in 'Flights of Fancy' have developed new works that reference Tatton Park's aeronautical legacy as well as the human urge to accomplish the impossible. 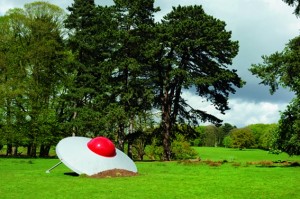