The Turku Biennial is a concept that is constantly evolving; the planning of the event never follows the same path. Each exhibition has been shaped by new curatorial procedures, selection processes, themes, fringe events and artists.

In the past ten years the Turku Biennial has invited artists from Finland, Sweden, Norway, Denmark, Iceland, Russia, Spain, Italy and USA. Partnerships allowed the exhibition to be shown in the Central Exhibition Hall Manege, St Petersburg in 2003 and in the Can Felipa Gallery, Barcelona in 2007.

Aboa Vetus & Ars Nova is a museum of history and contemporary Art, founded in 1995 and maintained by the Matti Koivurinta Foundation. Aboa Vetus is an underground archaeologal site of genuine ruins in a historical area of the oldest city in Finland. The art museum Ars Nova functions in the Rettig Palace, a former private home built in 1928. The architecture and history of the palace, as well as the the proximity of medieval Turku, have both been sources of inspiration for site-specific works produced for the Turku Biennials.

The artists for the 8th Turku Biennial exhibition have been selected. 16 artists were chosen from the 260 applications that arrived through an open portfolio submission. New works by 13 artists will be exhibited in the Aboa Vetus & Ars Nova Museum. Three artists will be presented in Turku Artists' Association's Gallery Å. The selected…

18 Artists and Artist Groups to Take Part in the 2015 Turku Biennial. 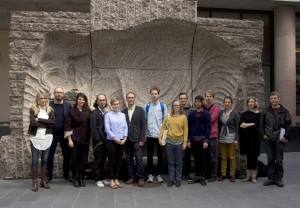